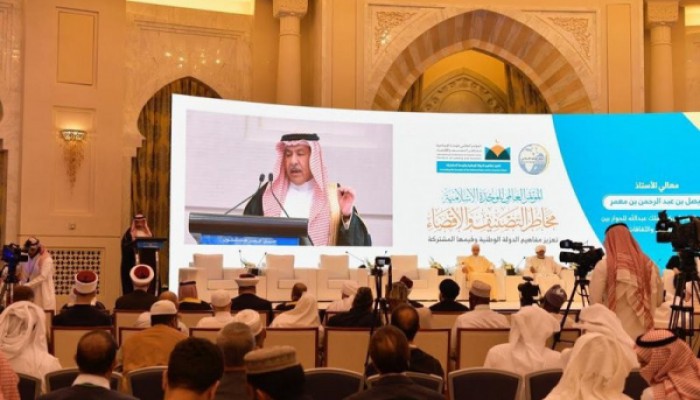 HE Dr. Ali Rashid Al Nuaimi, Head of the World Muslim Communities Council chaired the Council delegation to participate in the World Conference of the Islamic Unity (Risks of classification and exclusion), which was held under the patronage of the Custodian of the Two Holy Mosques King Salman bin Abdulaziz Al-Saud in Saudi Arabia under the theme "Promoting national concepts and its common values" on Wednesday and Thursday (12-13 December 2018).

His Royal Highness Prince Khalid bin Faisal, prince of the Mecca Region and consultant of the Custodian of the Two Holy Mosques, started the conference with the participation of a number of Highnesses, Excellencies and Eminent scholars from all over the world.

HE Dr. Ali Rashid Al Nuaimi delivered a speech at the conference entitled "Enhancing National Concepts and its shared Values".

The organized conference by the Muslim World League aims at bringing scholars, preachers and Muslim thinkers together, promoting the convergence of views between them with the consolidation of the Islamic concept and civilization and enhancing awareness of the importance of spreading the scientific moderation, Intellectual and social values to show the truth of Islam for all.

The World Conference of Islamic Unity discusses several topics, including "Islamic unity", "Muslims and the culture of difference", "obstacles to Islamic unity" and " Towards an effective Islamic unity ".

The conference also seeks to propose scientific initiatives that address the projects of hostility, hatred and sectarian strife, as well as extending bridges of trust and  understanding, exchange with the non-Muslim side and promoting the values of the national state.

The conference is attended by more than 1,000 religious, intellectual and academic leaders from 127 countries around the world.