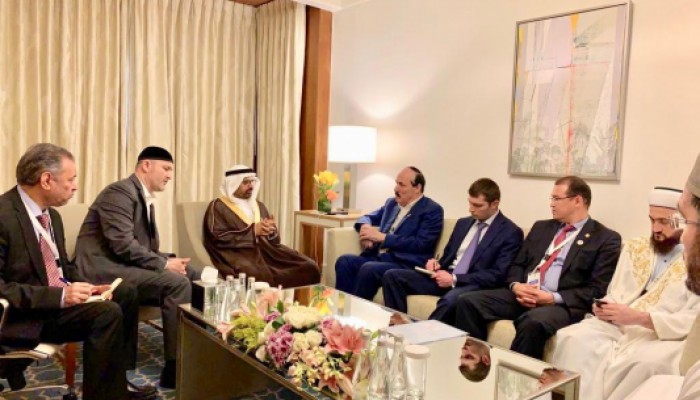 HE Dr. Ali Rashid Al-Nuaimi, Chairman of the World Muslim Communities Council, has received in Makkah the Permanent representative of the Russian Federation to the Organization of Islamic Cooperation, Ramazan Abdul Latiyof and his accompanying delegation to the World Conference “International Conference on the moderation values and restraint in scripture of Quran and Sunnah”, which was organized by the Muslim World League in Makkah.

The meeting witnessed discussion about the ways of consolidation of the common human values ​​and dissemination of the principles of moderation, restraint, tolerance and love; furthermore, consolidation of belonging to the homeland and respect for law, dialogue and coexistence with other religions and cultures. The conference was also attended by Radek Emadaldinov, the assistant of the president of the Republic of Tatarstan.

Chairman of the World Muslim Communities Council also received the delegation of the Supreme Council for Islamic Affairs in the Republic of Ethiopia headed by Sheikh Jilan Khider, Vice-President of the Council and his accompanying delegation. The meeting witnessed discussion about the issues of the Muslim community and the prospects for promoting the values ​​of citizenship and coexistence that serve stability and development in Ethiopia.