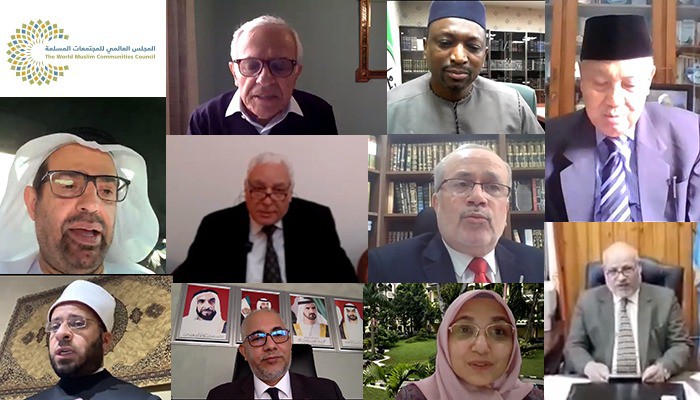 "Objectives of Islamic Law between Fundamentalism and Political Agendas" Calls for Establishing New Science of Objectives of Sharia, Linking with Morals and Values

The World Muslim Communities Council, in cooperation with the Association of Islamic Universities and the University of Darussalam, Indonesia, organized on Sunday, December 6, 2020, the virtual international conference entitled "Objectives of Islamic law between Fundamentalism and Political Agendas", via the Council's social media pages, with the participation of more than 30 high-profile scholars, jurists and academics from different all around the world.

The conference called, among its recommendations, for Establishing a new knowledge of the objectives, taught systematically in Islamic colleges and universities, with graduates specialists in the purposes of Islamic law, to control the process of research in the objectives, and to transform it from a theoretical subject to an applied field that precludes its exploitation politically and ideologically, as well as liberating al-maqasid from ideological, sectarian and political employment that aim to justify actions that cannot be justified by the disciplined jurisprudence, linking the objectives of Sharia to ethics and values, and transforming it into a philosophy of legislation, jurisprudence and principles.

In his opening speech to the conference, His Excellency Dr. Ali Rashid Al-Nuaimi, Chairman of The World Muslim Communities Council, indicated the importance of the conference theme because some people exploit the Sharia for their political agendas, and because the conference looks looks to the challenges facing Muslim communities, especially in light of some overriding supreme interests and issuing fatwas with political purposes that do not serve religion. His Excellency calls for the need to educate students on the importance of the objectives of Sharia, away from political agendas, and to emphasize the responsibility of Islamic universities in teaching these objectives within their curricula, so that their graduates are characterized by wisdom, balance and jurisprudence to serve Muslims.

His Excellency Dr. Usama Al-Abed, Secretary General of the Association of Islamic Universities, affirmed that contemporary issues need careful consideration, conscious thought and knowledge of the objectives of Sharia in order to bring interests and ward off evil. The  issue is in need of those with discernment and awareness, while adhering to the Islamic texts and emphasizing the validity of Islam for every time and place. He is explaining that the topic Maqasid al-Sharia comes within the framework of the civilizational revival and renewal movement, as that “objectives are the spirit of business,” as Imam Al-Shatibi says, so we have to highlight the merits of our religion over others, to ward off suspicions about the religion of tolerance and moderation.

His Excellency Dr. Qutb Sanou, Secretary General of the International Islamic Fiqh Academy, also stressed the importance of the conference, as it seeks to enable the Islamic nation to recover its civilizational health and its pioneering role in various fields. He is explaining that the objectives of Sharia are  the future, reality, aspirations and ability of Islam to re-pioneer in all fields of knowledge and science, as it achieve the goals of Islamic law and its teachings. He is stressing that to avoid the misuse of jurisprudence, we must divide the objectives into an independent science with precise specialization.

His Excellency Dr. Amal Fathallah Zarkashi, President of the University of Darussalam Gontour, Indonesia, noted the need to expand the circle of objectives of Islamic law to include preservation of reputation, comprehensive justice, equality and freedom of political practice. He is calling for action to achieve the supreme purpose of Islamic law, which is preserving the nation’s order and sustaining its goodness, and to study the purposes of Sharia law and Islamic principles to understand the textual provisions of the Qur’an and Sunnah. He is adding that the objectives are manifested in the concerted efforts and solidarity to guarantee the minimum basic rights of individuals, and that it is one of the rights of individuals, we have to provide peoples with a decent life, preserve their freedoms, achieve private and public security.

His Excellency Dr. Mohamed Bechari, Secretary-General of The World Muslim Communities Council, said that the scholars have agreed on the  Five Objectives Faculties: Which are preservation of five essentials of human well-being: religion, life, intellect, lineage, and property, while addressing the necessary, needy and refining interests. And that knowledge of the objectives is one of the critical and accurate mechanisms upon which Islamic jurisprudence is based, declaring that The World Muslim Communities Council, in coordination with the Association of Islamic Universities, establishes a research unit aimed to develop the researches for the rules of jurisprudence and fundamentalism,  to review refining what was written in the last three decades in particular., and liberates the knowledge of the objectives from both “neglecting” and “exploitation”.

At the end of the event, the attendees reached twelve recommendations:

1- The necessity of accurate scientific monitoring of the development of al-maqasid through Islamic history, and understanding the contributions of the great jurists in building the objectives as a scientifically disciplined structure.

2- Establishing a new knowledge of the objectives, taught systematically in Islamic colleges and universities, with graduates specialists in the purposes of Islamic law, to control the process of research in the objectives, and to transform it from a theoretical subject to an applied field that precludes its exploitation politically and ideologically.

3- Restoring the objectives to their transcendent moral position, to be the basis of Islamic jurisprudence and to help achieve the interests of people and ward off public and private evils.

4- Liberating al-maqasid from ideological, sectarian and political employment that aim to justify actions that cannot be justified by disciplined jurisprudence, linking the objectives of Sharia to ethics and values, and transforming it into a philosophy of legislation, jurisprudence and principles.

5- Developing a comprehensive methodology for the renewal of the Islamic discourse based on linking all components of religious thought, especially jurisprudential, to the objectives of Sharia, then reconsidering the historical jurisprudential choices, whether they are judgments or fatwas, in light of a solid and deep Sharia objectives understanding.

6- Integration objectives of the Sharia in public education curriculum to diconstruct the textual religious discourse that stuck in the past, which paves the way for the emergence of extremist and violent thought, and terrorism justified by religious texts, because objective thinking is the only one capable of achieving intellectual openness and acceptance of plurality and difference.

7- Transforming objectives of the Sharia into an essential component of the Islamic culture among ordinary Muslims, by focusing the Friday sermons and lessons of the mosques on the objectives, thinking of al-maqasid, and linking the legal rulings and fatwas with the strict objectives and principles of the Sharia.

9- Calling for the establishment of a specific jurisprudence for Muslim societies in non-Muslim countries based on a disciplined understanding of the objectives, their exemplary realization, and linking them to the system of morals, values and Islam.

10- Re-understanding the relationship between Muslims and others from the perspective of the supreme objectives of the Shari’a that aim to achieve the goals of all creation and ward off evil, and make preserving the human soul, honor and money among the higher goals of the Shari’a. In short, making al-Maqasid an ethical charter for world peace.

12- Call for the establishment of a joint research unit between The World Muslim Communities Council and the Association of Islamic Universities to activate these recommendations, and convert them into operational programs and action plans, in cooperation with the International Islamic Fiqh Academy.

The conference also filled with five sessions: The consolidation of the Maqasid research and its understanding before and after Al-Shatibi (such as Allal Al-Fassi and Ibn Ashour); The Ijtihad in the objectives: permissibility limits, possibility, and controls; The Ijtihad with the objectives in difficult times within the framework of significant Sharia guidelines; The effects of employing the maqasid in the intellectual and ideological projects of contemporary parties and groups; The effects of the political employment of the purposes outside the controls of legitimate policy; The limits of using the maqasid in science and subjects that do not fall within the circle of Islamic jurisprudence.