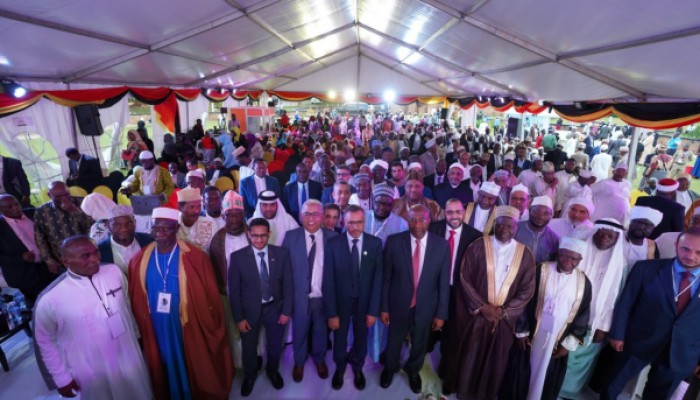 Ruhakana Rugunda, Prime Minister of Uganda opened the (Role of Muslim Youth in Building Africa of Tomorrow) conference in Kampala, the capital city of the Republic of Uganda, on Friday, 26 April 2019, which organized by the World Muslim Communities Council in cooperation with of Supreme Islamic Council of Uganda.

Ruhakana Rugunda delivered on behalf of His Excellency Yoweri Museweni- President of Uganda the opening address of the (Role of Muslim Youth in Building Africa of Tomorrow) conference in Kampala, the capital city of the Republic of Uganda. He thanked the organizers of the conference and assured that the Youth are the future of the African continent; they played a major role in the independence of Uganda.

Rugunda said during his speech that the Ugandan government cares about youth issues and their aspirations and believes in the importance of their role in political and social transformation. He stressed that the government has a plan to change the situation of youth, as well as initiatives and innovations to promote entrepreneurship and engage youth involvement in the work.

He added: "I say to the Muslim Brotherhood: Peace and safety are not coincidental; it comes rather through strenuous and deliberate efforts of all of us, therefore, we must be having the principles of peaceful and loving coexistence regardless of our cultural, racial and ethnic backgrounds.

The Prime Minister of Uganda also expressed his happiness to visit the United Arab Emirates recently, praising the signing of the document of human fraternity in Abu Dhabi that is embracing one of the greatest mosques in the world.

Ruhakana Rugunda, Prime Minister of Uganda called lastly on learning from the UAE experience and from its government and its innovative ministries.

H.E. Dr. Yousif Al Obeidli Director-General of the Sheikh Zayed Grand Mosque centre in Abu Dhabi said that he is pleased to convey to the participants the greetings of his homeland to the ancient Republic of Uganda, leadership and people and thanked His Excellency President Yoweri Museweni, President of the esteemed Republic of Uganda.

He added: “I came from the United Arab Emirates that believes in tolerance constitutionally, happiness as a way of life and goodness as a way towards international peace and coexistence; furthermore, to promote good citizenship in my country,  abode of the late Sheikh Zayed bin Sultan Al Nahyan, may his soul rest in peace. "

Al-Obaidli pointed out that the Sheikh Zayed Mosque has become a world-leading destination, with total visitors during the year 2018, 6,150,271 visitors; the total number of visitors from the Horn of Africa in the first quarter of this year more than thirty thousand visitors, from different cultures.

In Conclusion, the Director-General of the Sheikh Zayed Grand Mosque Center expected that the questions of the conference will open the door to discuss a number of current and influential issues of the world, including how to immunize young Muslims from extremist ideas in order to live in a healthy society free of intolerance, hatred and rejection of the other.

In turn, H.E. Sheikh Ramadan Shaaban Mubaji Mufti of the republic of Uganda said that Muslims in Uganda live in a communal unit and we do not have extremist groups; stressing that the Uganda's ruling party has entrenched the experience of interfaith tolerance in the country through establishing the Interfaith Dialogue Council in Uganda to promote tolerance and coexistence in the country.

He added that the Youth represent the large proportion of the population, so they should be directed towards development rather than extremism.

Moreover, Mufti of Uganda has commended the efforts of the Ministry of Tolerance in the United Arab Emirates and thanked the leadership of the World of Muslim Communities Council for organizing this conference.

Dr. Mohammed Bishari Secretary General of the World Muslim Communities Council has commended the Ugandan model, which establishes harmony among all components under the wise leadership. He saluted the United Arab Emirates for taking the decision to criminalize hatred of others and defamation of religions.

Bishari called for the need to put forward a practical and realistic plan to confront and treat the phenomenon of extremism and to work out an educational environment that is encouraging and catalytic for generations in the interest of achieving their goals, as well as Investment must be made in upbringing and education to counter the currents of extremism and radicalization.

The Conference had held two sessions: the first one entitled (Africa and the stakes of religious, cultural, and ethnic pluralisim) and the second one entitled (Efforts of young Muslims in advancing Africa's development).

The first session revolved around several topics, including religion and state in the constitutions of African countries, the foundations of African identity, the discussion of cultural and ethnic pluralism on the African continent, as well as the culture of dialogue among religious communities and their role in achieving peaceful coexistence.

While the second session discussed the phenomenon of exclusion and marginalization and issues of migration of African youth, as well as the efforts of young Muslims in advancing Africa's development and efforts crisis conditions in the region.

The conference "Role of Muslim Youth in Building Africa of Tomorrow" is based on a clear vision of strengthening relations and building alliances in order to find solutions and propose programs to enhance the role of Muslim youth in the renaissance of Africa, in a message aimed at promoting communication and understanding to counter extremist ideas, refuting the discourse of hatred through creating hope based on trust and mutual respect.

The conference also aims at addressing the most important African stakes and highlighting ways to transform them into capacities, as well as elaborating mechanisms to activate the role of the youth of Muslim societies to promote Africa, as well as enhancing confidence in Africa's capabilities and institutions among the younger generation.