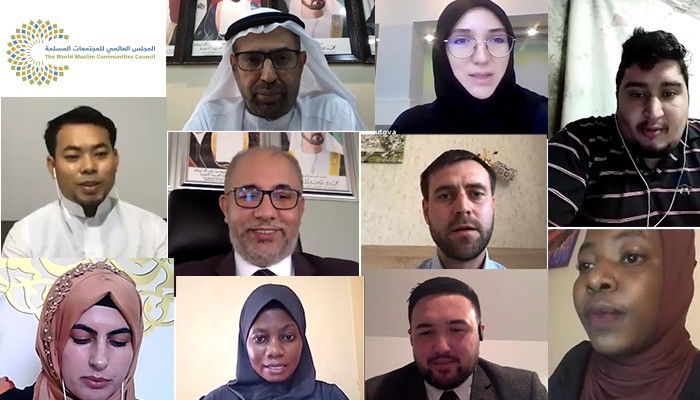 On Sunday October 4, 2020, the World Muslim Communities Council organized the virtual conference "Role of Youth in Promoting Societal Peace", with the participation of a group of young people from different countries, where they discussed mechanisms and ways to enhance the role of youth in achieving prosperity, coexistence and community peace in their countries. The conference was held at 9 am GMT via Zoom app and the council's social media pages.

In his opening and framing speech for the conference, His Excellency Dr. Ali Rashid Al-Nuaimi, Chairman of the World Muslim Communities Council, said that no society can enjoy security and stability without achieving social peace,because peace is necessary for the survival, cohesion and development of societies. Peace is not achieved by the efforts of the state alone, but the concerted efforts of all components of society, calling for the need for Muslim societies to have a fundamental and pioneering role in promoting social peace. He is calling for attention to youth and creating an environment that embraces and enables them to perform their positive role, highlighting the importance of public awareness among young people and giving them the important role in preserving the Muslim community.

The Chiarman of the Council also praised the French Council for the Muslim Faith for its role in dealing with the stage in which the Muslim community in France and Europe is going through, stressing that French President Emmanuel Macron has renewed his confidence in the Council, a message that we must receive positively and use it as an opportunity to enhance the role of Muslims in assuming their responsibilities in society French as a whole.

Dr. Mohamed Bachari, Secretary-General of the World Muslim Communities Council, affirmed that peaceful societal change and religious reform is achieved by giving confidence in the capabilities of young people. He said there is no opportunity to distance youth from decision-making and the innovation partnership that drives the promotion of peace values, as ambitious youth achievements have earned the world conviction and courage in developing young people in active and rising fields in their societies, explaining that the youth group is a distinct elite capable of establishing coexistence, because youth and peace are the same in influence and development, and no society can rise without them, stressing that the Council values the role of youth in overcoming obstacles and seizing opportunities.

Conference sessions began with the moderation of Ms. Lia Mahmutova, President of the Federation of Muslim Women of the Baltic States in Estonia.

Mr. Zakaria bin Mohamed, Secretary General of the Muslim Youth Union in Cambodia, in his speech entitled (Youth and Peaceful Coexistence: Cambodian Perspective) likened peace to oxygen, said "without it we will not live ... there is no value for prosperity and development without peace." He is affirming that peace is important in Cambodia, and the government places it as a priority in its policy, calling for more consolidation of societal peace and the establishment of values. He is explaining that the Muslim community in Cambodia (5% of the population) enjoys security and peace under the regulatory laws, builds the state and defends the homeland, as well as being harmonious In coexistence with Buddhism and Christianity, to maintains community peace by organizing educational programs and establishing religious dialogue.

Mr. Dmitry Chopin, Head of the Center for Strategic Partnership for Intercultural Cooperation in Russia, said that his country is not only rich in its resources, but also in its peoples, citing the experiences of the North Caucasus countries as a model for promoting peace between religions and ethnicities, as Dagestan is building a mosque in the name of (Jesus Mosque), while Chechnya is considered a brilliant example of peace, safety and economic prosperity. He is stressing in his speech entitled (Role of Russian Youth in Social Projects), that the Muslim community in Russia has an opportunity to demonstrate its capabilities for the benefit of society and the motherland through Muslim youth initiatives in promoting societal peace, such as fund to support culture in Russia, and youth initiatives in the distribution of food, support for families and others. Mr. Dmitry Chopin thanked the World Muslim Communities Council, represented by its Chairman, His Excellency Dr. Ali Rashid Al Nuaimi, for their interest in youth and their empowerment.

Mrs. Fatma Karaj, Head of the Women’s Office in the Albanian Community, in her speech entitled (Investing in Youth to Promote World Peace:  Albanian Muslim Community Model), pointed to the importance of youth as a great element in finding solutions to international conflicts, to contribute to strengthening community peace, calling for Youth to promoting peace, starting with families and feeling a sense of responsibility, participating in humanitarian activities, adopting human and Islamic values and spreading peace. She is stressing that young people are at the forefront of change in societies to overcome mental patterns by spreading the message of tolerance, referring to the initiatives of the Muslim community in Albania by promoting peace in society through youth and strengthening the role of educational institutions.

Mrs. Aisha Ajara, a student of law in the Islamic University of Uganda, called on to benefit from the innovative capabilities of young people, and the technology of communications, to promote social peace and social justice, as well as to enhance global communication regardless of geography, and to establish a network that brings us closer to each other. She is explaining in her speech, (How Can Young people Use Internet to Promote Social Justice and Peace?), the mechanisms to promote peace and community justice among young people by correcting information, spreading positive information and values of goodness, spreading a culture of tolerance, establishing positive relationships, and not spreading lies.

Mr. Tila Harrison Hunt, a young Muslim activist from New Zealand, spoke about the experience of societal peace in his country, which was subjected to a terrorist attack last year, stressing the need to enhance community peace in view of the challenges of youth. He added in his speech (Strategies to Enhance Social Peace Through Youth), to the challenges of youth in New Zealand and the world, namely crime, suicide, extremism and identity, reviewing strategies for promoting social peace through positive engagement and caring for youth, cooperation with religious leaders to instill peace and combating extremism, launching a dialogue on community peace, cooperation with government institutions, and attention to education starting from the family and society, as well as positive dealing with religions and differences.

The council seeks, through holding dozens of virtual conferences, seminars and activities, to localize the concepts of religious, ethnic and cultural pluralism, in a manner that preserves human dignity and respect for his beliefs, and establishes the values of moderation, dialogue  , tolerance and belonging to the homelands.