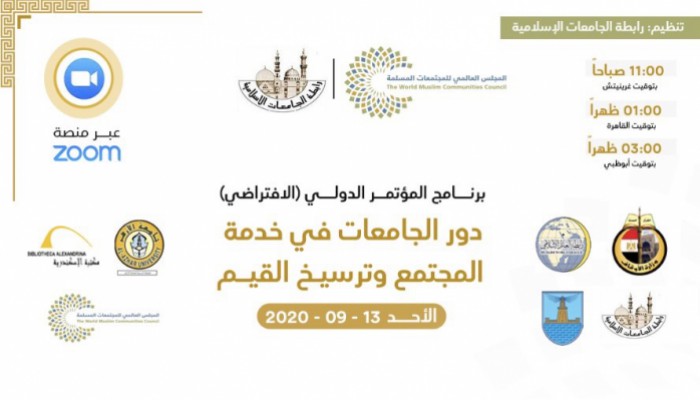 On Sunday, September 13, 2020, the League of Islamic Universities held a virtual international conference entitled "Role of Universities in Serving Society and Consolidating Values", under the auspices of the Islamic World League, with cooperation of the Egyptian Ministry of Endowments, Al-Azhar University, Alexandria University in Egypt, the Institute of Moderation at King's University  Abdulaziz in Saudi Arabia, and the World Muslim Communities Council, in addition to the participation of a number of ministers, senior scholars, university presidents and specialists.

The conference recommended the importance of developing critical thinking skills among youth to confront the spread of rumors and extremist thought, develop teaching and learning strategies, hold professional development courses for teachers and training workshops for students to train in critical thinking, launch awareness campaigns for the community, and issue an ethical charter for Islamic universities in proportion to authentic Islamic and university values.

The participants also recommended that the Sharia curricula in the Islamic world, especially in universities, institutes, colleges of Sharia, schools and educational institutions, be characterized by the enlightened moderate thinking that Islamic laws urged, stressing the need to pay attention to Sharia sciences that are no less important than other sciences. The participants also called for making more efforts to bring about a shift in educational curricula and methods, and even in purifying the scientific material that we provide to our society and students of Saria so that it reflects originality and tolerance, develops cultural and educational values.

The conference recommended necessity of harnessing the capabilities available, in particular the availability of elite thinkers, freedom of scientific research, openness to society, and communication, and the tools and facilities to support intellectual, cultural and educational activity, for communicating with the community to play its required role as a beacon of progress. They recommendalso that university programs should include specific plans sponsored by leaders and undertaken by activists, professors and young students, to achieve that goal and monitor its continuation in a sustainable manner.

The conference sought to achieve several goals, including highlighting the hoped-for role of universities in serving Arab and Islamic communities after the Corona crisis, as well as enhancing the role of these important scientific edifices in building the value system in and consolidating them through activities and programs, in addition to highlighting the driving values of progressive religious thought to enable universities to apply it in real life.

The scientific papers of the conference dealt with the hoped-for role of universities in reviving the value system and consolidating it in society. through sessions and working papers that discussed issues of Islamic and human values, values ​​and its application in Islamic universities' programs, curricula, activities and research, and promotion of the culture of youth responsibility towards their national countries and the respect of the other.