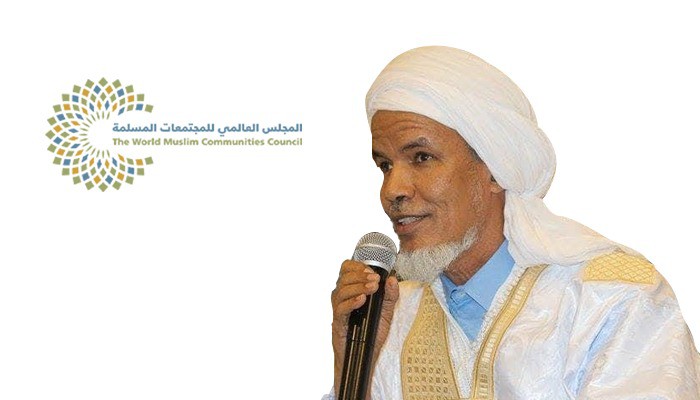 His Excellency Sheikh Mohamed Al-Hafiz Al-Nahawi, President of the African Scholars Forum, President of the Islamic Cultural Association in Mauritania and West Africa, thanked the UAE for its efforts in spreading the message of Islam and the Islamic organizations that itbembraced. He thanked also the leadership of his country, Mauritania, which has good relations with  the UAE, and give his thanks to the World Muslim Communities Council as a pioneering body in spreading the message of mercy to the worlds.

During a virtual lecture organized by the World Muslim Communities Council entitled "Role of Scholars and Sheikhs in Achieving Spiritual Security", Sheikh Mohamed Al-Hafiz Al-Nahawi said on Saturday October 10, 2020, that 23 verses in the Holy Quran referred to the word "security", while 19 verses to the word "spirit", given the importance of security for humanity. "Spiritual security is devotion to worship of Allah and a need for all of humanity," add Al-Nahawi.

He clarified the provisions of the Medina Document as an eternal constitution and the first of it's kind, which establishes citizenship, coexistence and spiritual security for all citizens within the concept of the state, stressing that building individual means constructing society and the homeland, with ideas of citizenship and human values.

His Excellency Sheikh affirmed that achieving spiritual security requires several things, among them the sheikhs and scholars assuming their responsibilities, focusing on balanced spiritual education, back to the Qur’an and the Sunnah, promoting peaceful coexistence, as well as consolidating concepts of relations and transactions between people based on reality.

Sheikh Mohamed called for the export of the Prophet’s ethics and behavior through actual practices, and dealing well with others with a kind word and self-purification, by achieving the three ranks: Islam, Iman and Ihsan, as well as achieving containment by strengthening divine ethics, to get the spiritual security.