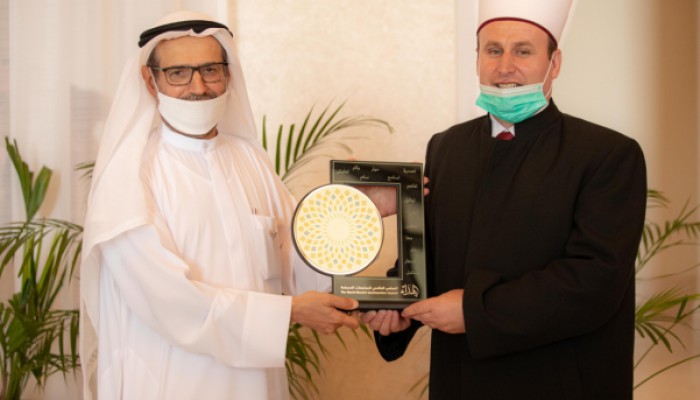 His Excellency Dr. Ali Rashid Al-Nuaimi, Chairman of the World Muslim Communities Council received on Friday Sheikh Bujar Spahiu, Head of the Islamic Sheikhdom in Albania. During the meeting, memorial shields were exchanged between the two sides.

Al-Nuaimi welcomed the visit of Sheikh Spahiu to the UAE capital, Abu Dhabi, wishing it strengthen cooperation and efforts to consolidate tolerance, coexistence and peace among Muslim Communities and humanity.

The two parties have discussed the efforts of Muslim communities, their positive role among their countries and societies to limit the spread of Corona, and the mechanism of joint action between all members of society, organizations and governments in this operation.

The meeting also witnessed a discussion on how to consolidate common human values, spread the principles of moderation, tolerance and love, identify, respect the law, dialogue and coexistence with other religions and cultures, especially during current circumstances.