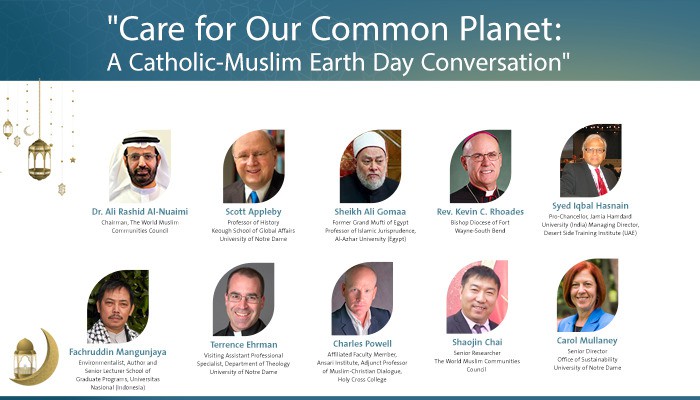 "Care for Our Common Planet: A Catholic-Muslim Earth Day Conversation", a virtual conference of The World Muslim Communities Council.

The World Muslim Communities Council and the Ansari Institute for Global Engagement with Religion at the University of Notre Dame, in USA, in partnership with the World Religions World Church Graduate Program  of Notre Dame’s Department of Theology, organized Thursday Ramadan 10 1442 AH / April 22, 2021, a virtual conference entitled "Care for Our Common Planet: A Catholic-Muslim Earth Day Conversation, with participation of scholars, including religious leaders, academics, researchers and specialists, via the Council's social media pages.

The importance of the conference is that it comes on Earth Day with the participation of leaders, scholars who believe in the importance of the participation of religions in laying a basis for mutual understanding between traditions and societies, creating common ground, and inspiring joint action, in order to establish peace and human prosperity on the planet that we all share.

The conference answers many environmental questions, about the role of religions in preserving the planet, including how to create a true green recovery that drives continuous dialogue and joint action between religions and societies, the possibility that how our response to environmental and societal challenges are based on compassion, justice and recognition of the valuable contributions of religion, how believers around the world can to join hands to create a global culture of peace, fraternity, and creatures reverence to the Creator.

In his opening speech to the conference, His Excellency Dr. Ali Rashid Al Nuaimi, Chairman of The World Muslim Communities Council, referred to the importance of recognizing the good side in all religions that present distinctive initiatives and programs and play a pioneering role in achieving peace. He is calling for working together regardless of religions, races, cultures and colors in confronting the challenges that threaten us all without discrimination, as the pandemic has taught us to face all challenges and to exploit the opportunities available to us with solidarity and joint action.

His Excellency added: "It is imperative for joint solidarity between religious leaders and academics to play roles in facing the pandemic and drawing a map for the future. We must adhere to our important roles in order to create a new world and a better future for the next generation by protecting our planet," stressing that we will not be able to achieve tangible progress and make a difference in the service of humanity without working hand in hand to achieve good for all.

Most Rev. Kevin C. Rhoades, Bishop of Fort Wayne Diocese in South Bend, said that His Holiness Pope Francis, Pope of the Catholic Church, is interested in our common planet, and that Catholics, Muslims and others are responsible for protecting our Earth and preserving the environment. The greatness of the Creator is embodied in the splendor of the universe and building this planet, as well as in the creation of creatures in the world that we share together, referring to the "Human Fraternity" document ,that was signed in the UAE capital Abu Dhabi, emphasized cooperation between religions for the sake of building the earth and achieving peace.

added, "The Catholic Church realizes the common responsibility of mankind in protecting the planet, and calls for achieving harmony in the global system by moving away from selfishness in the exploitation ofresources, so the gift of God must be preserved for all creatures, for lack of respect for resources harms the global system," explaining that there is a unified policy for the Catholic Church to protect the planet, and thus achieve human dignity, as that Catholic teachings call for confronting the global crisis within the human family and using resources responsibly and in balance.

The activities conference began by Dr. Charles Powell, associate faculty member at the Ansari Institute and Assistant Professor of Islamic-Christian Dialogue at Holy Cross College, and Dr. Shaujin Chai, Senior Researcher. In the World Council of Muslim Communities, in two sessions; The first session was titled "The Bible and Sustainability ... Islamic and Catholic Perspectives on Humanity and the Planet", while the second session was titled "Green Creed and Green Recovery ... Theory and Practice of Climate Commitment and Sustainable Development."

The activities of the conference began by Dr. Charles Powell, associate faculty member at the Ansari Institute and Assistant Professor of Islamic-Christian Dialogue at Holy Cross College, and Dr. Shaujin Chai, Senior Researcher in The World Muslim Communities Council, in two sessions;  The first session was titled "The Religions and Sustainability: Islamic and Catholic Perspectives on Humanity and the Planet", while the second session was titled "Green Creed and Green Recovery: Theory and Practice of Climate Commitment and Sustainable Development."

In the first session, Sheikh Ali Gomaa, the former Grand Mufti of Egypt and a professor of Islamic jurisprudence at Al-Azhar University in the Arab Republic of Egypt, said that everything around us worships Allah and praises and prostrates to Him, so we are consistent with the universe, environment, nature and earth. He is stressing that the basis of Islam is mercy and kindness with all the creatures surrounding us and dealing with kindness without violence, saying, "Islamic manners and the morals taught us how to raise our children, love of the universe, water and air, and resistance to pollution, as Islam calls for gentleness and not destroying reserves or forests or extravagance in eating and drinking, etc."

He added, "We have been cooperating with our Catholic brothers and those concerned for a quarter of a century to preserve the environment and restore it to its previous state. We must preserve the beauty that Allah created, by initiatives concerned with humans, animals and all the universe. We have many institutions that care about the environment and the earth, and we always strive to work together with everyone to achieve human dignity".

Reverend Terence Ehrman, assistant specialist and visiting professional at the Department of Theology at the University of Notre Dame in the United States of America, said that we are children of Adam and the creation of God. The beauty of anything in this universe takes us to the Creator, affirming that our God is the embodiment of love and we as humans share his love, do that we have seven heavens full of goodness, explaining that the Lord created an awareness of the nature of creatures and the best of everything that He created with purpose, meaning, wisdom and awareness, for the Lord is in control and He is created the world for the sake of continuity and the achievement of good for all.

He called for Christians to act within the framework of their responsibility to preserve the environment, because ignorance about the environment means ignorance of Christ, as well as respect for the blessings of God Almighty, considering that this is inseparable from the relationship with Christ who works to restore relations with nature. He is pointing out that the Bible connects us with the Lord, so we must to thank our Creator for all that He created for us in this wonderful universe.

In the second session, Dr. Syed Iqbal Hasnain, Pro-Chancellor of Jamia Hamdard University (India), Managing Director of the Desert Side Training Institute in the UAE, former Vice Chancellor of the University of Calicut in India, and a former Professor of Environmental Sciences at Jawaharlal Nehru University in India, said that we are witnessing a rise in global temperature and an escalation of carbon emissions and gases, water scarcity, and spread of pandemics. He is hoping to emerge from the global pandemic, develop solutions to climate change, end environmental problems and achieve sustainable development, noting the experience of the United Arab Emirates, which began to use alternative energy resources and nuclear energy, despite the state’s enjoyment of oil resources. He is pointing out that there are many countries following the example of the UAE in the field of green energy.

He added, "We need real initiatives and programs of action to get out of the tragic situation that we will face in the coming years, as climate change targets everyone without discrimination, and we must work together, regardless of religion, race or color, so all religions must work together to develop solutions about climate change and serve all humanity."

Dr. Carol Mulaney, Senior Director of the Office of Sustainability at the University of Notre Dame in the United States of America, indicated that there is a great link between environmental sustainability and the future of the planet, in order to achieve human dignity, and this is confirmed by Catholic teachings. She is calling for the promotion of academic research by conducting solid research and educating future leaders and focusing on education in daily life, and the need to work to reduce carbon emissions, restore energy resources and conserve water as a social responsibility, and thus protect the environment as a whole. She is stressing the great relationship between religion and sustainability by saying, “This is what we are working on at the University of Notre Dame by presenting initiatives and programs that aim for the good of all humanity".

In his closing remarks on the conference, His Excellency Dr. Mohamed Bechari, Secretary-General of The World Muslim Communities Council, cited the noble Quranic verse, "And do not act corruptly, making mischief on the earth," to confirm that our responsibility is to preserve the natural balance that Allah has commanded not to violate, and that the responsibility of followers of divine religions and positivist philosophies is a great responsibility in protecting the environment. He is calling for the preservation of the environment with all its animal, physical and vital components, as Allah forbids corruption on the earth in all its forms, because corruption threatens the balance that He created, and that states have a collective responsibility in combating desertification, helping the affected countries and stopping global pollution, because our destiny is one.

His Excellency concluded his speech by saying: “The best thing that I will conclude with is a quote by the late Sheikh Zayed bin Sultan Al Nahyan, may God have mercy on him, in a speech marking the first National Environment Day in the country in 1998: “We are passionate about our environment because it is an integral part of our homeland, our history, and our heritage. Our ancestors lived on land and at sea, and were able to withstand this environment despite all its challenges. Of course, they would not do that if they did not realize the necessity of preserving the environment by taking only of the essentials for survival, and protect it for the sake of future generations. With Allah Almighty’s permission, we will continue working to protect the environment and wildlife in our country, just as our ancestors did before. And if we fail to fulfill this duty, our children will blame us for wasting an essential part of their legacy, and our heritage."

It is noteworthy that the World Muslim Communities Council is an international non-governmental organization, headquartered in the UAE capital Abu Dhabi.  It is considered a think tank to rationalize organizations and societies working in Muslim societies, renew their thinking and improve their performance in order to achieve one goal;  The integration of Muslim societies in their countries, in a way that their members realize the perfection of citizenship and complete affiliation with the Islamic religion. The council seeks, through holding dozens of virtual conferences, seminars and activities, to localize the concepts of religious, ethnic and cultural pluralism, in a manner that preserves human dignity and respect for his beliefs, and establishes the values of moderation, dialogue, tolerance and belonging to the homelands. 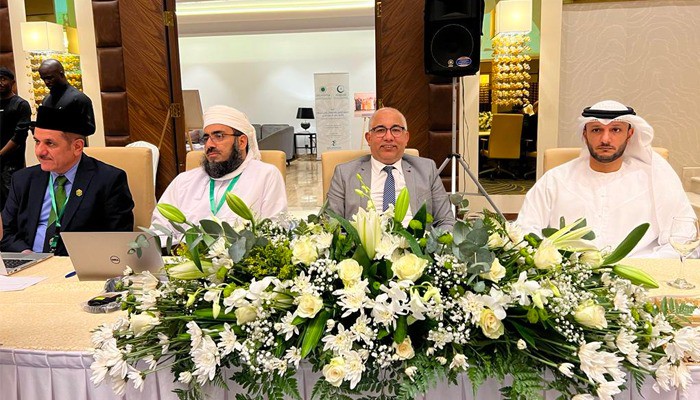 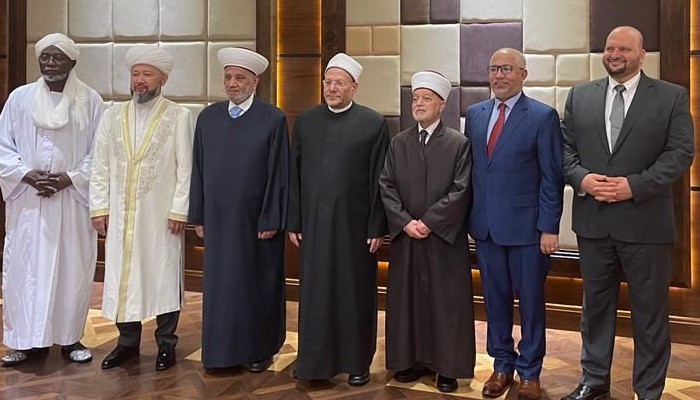 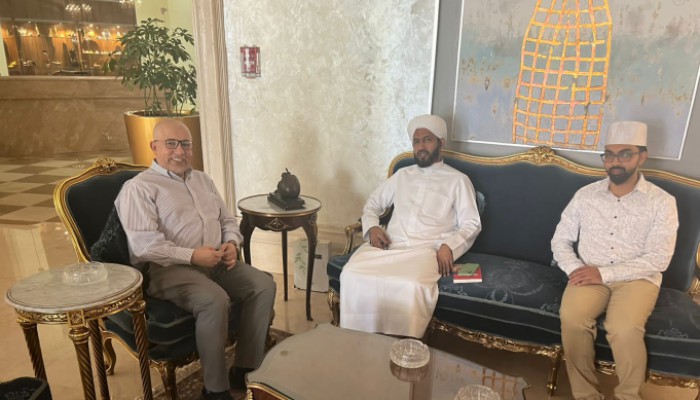