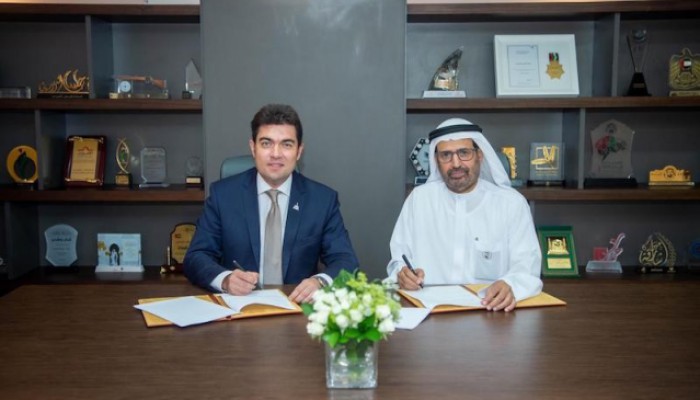 On Wednesday, 4th Sep 2019, in Abu Dhabi, a cooperation agreement was signed between the World Muslim Communities Council and the Bolgar Islamic Academy in the Republic of Tatarstan, Russia.

The agreement aims to exchange common experiences in consolidating societal peace, spreading the values of tolerance and coexistence, and developing Islamic science curricula in Russian universities and institutes that offer degrees in various Islamic sciences themes.

The agreement was signed by His Excellency Dr. Ali Rashid Al Nuaimi, President of the World Muslim Communities Council, and His Excellency Daniar Abderrahmanov, Director of the Bolgar Islamic Academy.

Under the articles of the agreement, the two parties agreed on several matters, including preparing in-depth studies on the history of Islam in Russia, and the religious heritage in general and jurisprudence in particular for Russian Muslim scholars, and converting their contributions into sources for building curricula at various educational stages, developing curricula for teaching Arabic to non-native speakers, and implementing joint initiatives and projects between the two parties, such as scientific conferences, seminars, open lectures, panel discussions, exhibitions and other scientific, educational and cultural activities.

According to the agreement, the Council will work to strengthen the "academic" relations with the distinguished universities in the Islamic world, and to provide resources and capabilities that ensure the accreditation of their degrees, and their equivalence with the same academic degrees provided by the prestigious Islamic universities, as well as provide advice and scientific and educational services, which contribute to the advancement of the educational process in the Academy, and achieve its scientific, educational and research objectives, in addition to implementing joint initiatives and projects in the scientific, educational and cultural fields.

According to the agreement, the two parties form a follow-up committee to develop an approved annual plan in which work programs are drawn up within the framework of joint cooperation areas, and the mechanisms for their implementation. A detailed report on this is submitted to the leadership bodies in the Council and the Academy.

It is noteworthy that the World Muslim Communities Council is an international non-governmental organization, based in the UAE capital, Abu Dhabi. It includes in its membership 600 organizations from 140 countries, while its general secretariat consists of 17 members representing Muslim societies in non-Islamic countries, as it is considered a think tank for the rationalization of organizations and associations working in Muslim societies, renewing their ideology, and improving their performance in order to achieve one goal; the integration of Muslim societies into their countries, in a way that achieves full citizenship for its members, and complete affiliation to the Islamic religion.

The Bolgar Islamic Academy is also a higher education institution that focuses on training religious cadres specialized in Islamic sciences, including judges, researchers, teachers, muftis, preachers, and imams. It is also concerned with conducting scientific studies and research in the field of Islamic studies, combating extremist ideology, and consolidating dialogue and peaceful coexistence between religions.