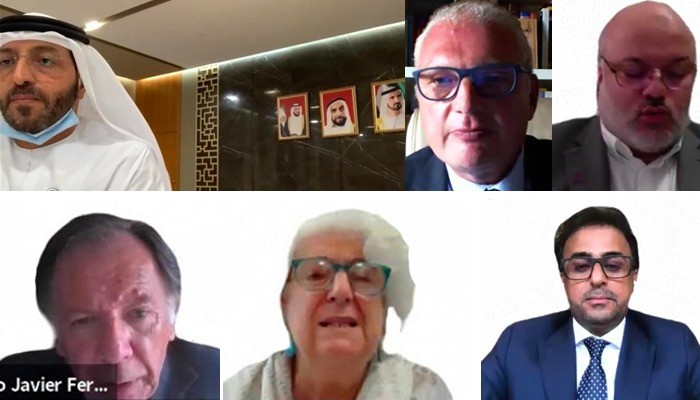 “Abrahamic Family.. Peace and Communication" Conference.. Foundation for Islamic Culture and Religious Tolerance in Spain calls for Promotion of Coexistence between Religions and Nations

The Foundation for Islamic Culture and Religious Tolerance in Spain held a virtual cultural conference entitled "Abrahamic Family.. Peace and Communication", on Monday 14 September 2020, in which prominent figures discussed in their scientific papers themes on peace and coexistence between religions for the service of all humankind. The conference moderated by Dr. Alfred Guterres Kavanagh, President of the Foundation.

Dr. Mohamed Matar Al-Kaabi, Chairman of the General Authority for Islamic Affairs and Endowments in the United Arab Emirates, affirmed in his paper entitled “The Emirati-Israeli Treaty in Light of the Prophetic Treaties” that the Emirati-Israeli agreement is a brave and wise strategic decision based on the lofty values ​​of our true Islamic religion. Achieving peace and spreading harmony since the era of the prophethood, citing the peace treaties concluded by the Prophet Mohamed (PBUH) with the Jews and others, such as the Medina document, Hudaybiyah peace treaty with the Quraysh, treaty with the Christians of Najran, and the interests that ensued from all previous treaties.

Al-Kaabi explained that the scholars have derived from the treaties two basic conditions in covenants, namely that they are the prerogative of the ruler, and the interest in treaties.

Dr. Al-Kaabi referred to the UAE's continuous efforts to bring about a just and comprehensive peace, which strengthened its position globally, stressing that the country, since its founding by His Highness Sheikh Zayed bin Sultan Al Nahyan, has known peace initiatives regionally and globally.

While Mr. Mohamed Ajana Al-Wafi, Secretary General of the Islamic Commission in Spain presented a scientific paper focusing on "Peaceful Treaties and their Role in Achieving Coexistence and Civilized Communication", in which he referred to the experience of religious and cultural pluralism in Spanish society, stressing that the Spanish constitution provides for freedom of belief without restrictions. The constitution constitutes a road map for the laws that have been ratified by the government and parliament, adding that Spain witnessed the increase in the number of Muslims, reaching nearly two million in 2019.

al-Wafi affirmed that peaceful coexistence and communication in Spain is important and that Islamic principles that call for acquaintance and the concept of human dignity have contributed to it in the Qur’an, calling for a correct understanding of Islam to achieve peaceful coexistence with others, and that thinkers must clarify this concept and remove ambiguity about it. .

Dr. Javier Vernadis Fabina, a professor at Complutense University in Madrid and director of Oriental and Hebrew studies at the same university, speaks in his paper entitled "Joint Bonds between Abrahamic religions and How to Invest it ... Judaism as a Model", on the roots and historical links between religions, and the importance of promoting a culture of religious tolerance. He is explaining that Abraham (peace be upon him) is unified the three Abrahamic religions with the same premise.

Fabina praised the UAE's experience in embodying religious tolerance in the historical agreement that signed with Israel, saying, "we need a culture of tolerance, understanding, getting to know others and respecting human rights ... we need to exclude the concept of violence and cooperation."

In her scientific paper “Importance of Interfaith Communication and Cooperation and Role of Christianity,” Dr. Carmen Lopez Alonso, an honorary professor at Complutense University and a researcher at the Institute of Interfaith Sciences, said that religion has now emerged as a focus of conflict, and a means exploited by extremist groups, which resulting in hatred against religions, as statistics confirm a decrease in the practice of religion in Spain, especially among youth, indicating that religions are an effective component of society, and that we must understand the legal framework (constitution) in religion, calling for communication for interfaith cooperation.

Dr. Alonso praised the bold initiatives provided by the UAE to spread peace, such as the establishing the Center for Islamic Culture and Religious Tolerance in Spain, and signing the Human Fraternity Document and other initiatives for peace, coexistence and tolerance, stressing that we must build bridges and move from word to action through education.

The conference concluded with a closing speech by Mr. Jumah Al Kaabi, Director General of the Foundation for Islamic Culture and Religious Tolerance, in which he indicated that achieving peace requires great effort, initiatives, courage, wisdom and constructive cooperation between countries and peoples, because the choice of war and skirmishes leaves behind blood, permanent hatred and many disputes.

Mr. Al-Kaabi added that achieving peace is the goal of religions and honorable morals, and the highest path is agreement and religious freedom, including peaceful agreements, which requires affection, love, peaceful coexistence and acceptance of the other, stressing that the requirements of the civilized future are only based on peace, love, noble values ​​and tolerance.