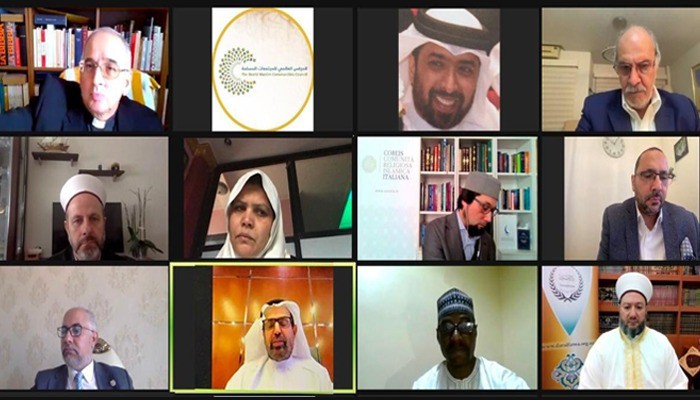 The World Muslim Communities Council concluded, on Sunday, March 7, 2021, its virtual conference entitled "Pope Francis in Iraq: Abrahamic Roots and Footsteps", with the participation of a group of scholars, clerics, specialists and academics from different countries, via the Council's social media pages.

In the opening and guiding speech of the conference, His Excellency Dr. Ali Rashid Al-Nuaimi, Chairman of The World Muslim Communities Council, referred to the importance of holding events to celebrate the historic visit of His Holiness Pope Francis, Pope of the Catholic Church, to Iraq, and to invest it in sending the correct messages. He is stressing that Iraq is a great country with its civilizations, and the visit of the Pope confirms the concepts of coexistence, pluralism and diversity, adding that the roots of religions are firmly rooted in our region, so we should be proud about the three Abrahamic religions.

His Excellency clarified that the visit created a movement inside and outside Iraq to achieve security, safety, stability, prosperity and peace for all. He is calling for highlighting the positive side of the visit, and not to leave chances for the predators who spread hate speech and extremism. He is citing the Pope’s saying, “Let arms be silent,” which means that we need an overwhelming presence and a strong voice to spread the values of peace and coexistence.

Monsignor Khaled Akasheh, head of the Committee on Religious Relations with Muslims in the Pontifical Council for Interreligious Dialogue, said that our master Abraham is the father of all of us, so the visit of Pope Francis to Iraq is a visit to the homeland of our master Abraham. He is explaining that the Pope's messages are the pilgrimage to the sources, and affirmation of the spiritual path of the believer, as well as remembrance of the people of faith to benefit the individual and society, affirming that life is sacred and our duty is to preserve it, and that violence and terrorism are distort the image of religions.

Monsignor Khaled explained that peace glorifies God and makes people happy, pointing out that the visit also confirms dialogue between believers based on respect and honesty, and promotes dialogue that enhances trust and joint cooperation to achieve the common good. The Pope’s meeting with religious leaders is one of the most prominent stations of religious dialogue. He is calling for fighting corruption as a scourge that must be overcome, as well as affirming equal citizenship for all to achieve justice for the components that have suffered from terrorism in Iraq, such as the Yezidis.

His Excellency Dr. Mohamed Bechari, Secretary-General of The World Muslim Communities Council, said that Pope Francis' visit to Iraq carries the message of coexistence, citizenship, peace and reassurance, and comes in an important circumstance and concern in the region in general, and proves that coexistence between all religious sects is a great strength. He also confirms that the visit conveying messages of reassurance from the Vatican, by erasing pain and consolidating coexistence among all, and affirming the establishment of the state of citizenship, right and law that guarantee religious and sectarian pluralism.

Bechari added that the visit promotes peace and coexistence as the only way for the public good. It comes as an expected visit from the peacemakers for the benefit of mankind, and an embodiment of the provisions of the "human fraternity" document that was signed in the Emirati capital Abu Dhabi, the capital of coexistence and peace.

The main session of the council started for the virtual conference organized by The World Muslim Communities Council “Pope Francis in Iraq .. Abrahamic Roots and Footsteps”, led by Sheikh Hassan Mussa, Vice President of the Fatwa Council in Sweden, who said that Islam is a universal religion that assured the earth is for Allah and the homeland is for all his creatures. He is affirming the presence of non-Muslims in the world is a universal will, and there is no way to erase them by any human will, so we must strengthen cooperation, alliance, solidarity, harmony and the values of coexistence, and we should know that the Qur’an, Hadiths, and values that combine the fiqh of the text and the jurisprudence of reality are our approach and path of life that we must adopt, because the culture of exclusion and elimination has not found any benefit, and there is no way to live except in togetherness in a multicultural, ethnic and religious society.

In his speech, Imam Yahya Pallavicini, President of the Islamic Foundation in Italy, said that Pope Francis' visit to Iraq (the center of civilizations) carries messages of wisdom in the face of terrorism and extremism, and strengthens human fraternity and the sanctity of life among human beings, strengthening relations between believers. It has spatial connotations that are highly sacred to believers, as it reinforces respect for identities and differences and promotes good citizenship.

Sheikh Dr. Salim Alouane, Secretary General of Dar al-Fatwa (the Supreme Islamic Council of Australia), explained that All Almighty has commanded us that righteousness is permissible between Muslims and non-Muslims, while our religion urges us to do good deeds and promote good love for Muslims and non-Muslims, stressing that the visit of the Vatican Pope Francis to  Iraq is a historic visit, like his visit to the United Arab Emirates, so we should meet the visit with further consolidation of the concepts of justice and moderation, and rejection of extremism and terrorism.

Dr. Muhammad Yusouf Hajar, Secretary-General of the Islamic Organization of Latin America and the Caribbean in Argentina, also referred to the importance of Pope Francis' visit to Iraq, where there is one of the oldest Christian societies in the world, to support interfaith dialogue, stressing that the visit embodies the principles of the "Human Fraternity" through the consolidation of mutual respect and cooperation between religions for the good of all mankind, expressing his hope that this visit will culminate in reaching an agreement like that was signed in the UAE capital, Abu Dhabi.

Dr. Khider Abdul Baqi, Director of the Nigerian Center for Arab Research in Nigeria, mentioned the dimensions and historical implications of the Pope's visit to Iraq and its manifold implications in terms of strengthening human relations, saying that the Pope's visits are symbolic in countries that are rich in plurality and diversity, especially as they come at a specific time, to celebrate our master  Abraham, so we must discuss concepts scientifically away from ideology. He is calling on the clergy and intellectuals thought to move away from elite discourse and consolidate simple populist discourse.

Ms. Serma Khan, President of the Association of Muslim Women Welfare in Nepal, said that the life of Abraham is respected in the whole world, because it establishes the sublime values among all humankind, saying that the visit of the Pope establishes harmony within society, coexistence and union among members of society, and carries a deep message with a positive impact on society in order to achieve the common good. Sh is citing the experience of her country, Nepal, which is considered a model of harmony.

Giasiar Serif Damadoglou, the former deputy mufti and professor of Islamic sciences in Greece, called for the belief in living together on this land and to consolidate the concepts of peace and religious coexistence without discrimination, stressing that the best prayer for the Messenger begins with peace, so peace is the message of Islam for the sake of consolidating coexistence, and goodness for all of humanity. He is expressing his hope that Pope Francis' visit to Iraq will be an end to bloodshed and the beginning of a new life based on truth and justice, to spread the true messages of religions that calling for peace and wisdom regardless of religion, color or race.